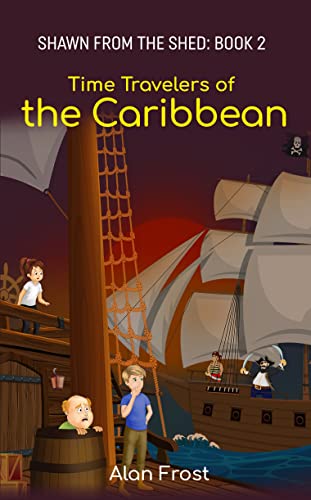 Sometimes, to beat a pirate, you have to become a pirate.The adventure continues in this award-winning sequel.To anyone else, it would seem like a perfectly ordinary shed in a perfectly ordinary garden. But to twelve-year-old Johnny and his nine-year-old sister, Ella, it is so much more. This is where Shawn invented the time machine.Now the machine is ready to take them back to 1699 – to the Golden Age of Piracy – where they soon cross paths with the most dreaded pirate of the Caribbean.In a time when sailors and pirates settled their differences with swords and cannonballs, they find themselves split up, stranded, and with the lives of innocent merchants in their hands. Once again, Johnny and Ella must rely on crafty planning, trickery, modern technology, and Shawn’s incredible inventions, but this time it may not be enough. Sometimes, to beat a pirate, you have to become a pirate.