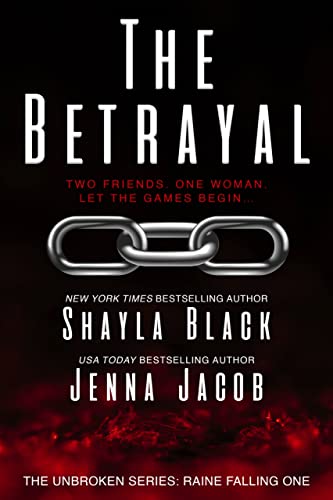 Two friends. One woman. Let the games begin…Raine Kendall has been in love with her boss, Macen Hammerman, for years. Determined to make him notice her, she pours out her heart and offers him her body—only to be crushingly rejected. When his very sexy best friend, Liam O’Neill, sees Hammer refuse to act on his obvious feelings for her, he plots to rouse his pal’s possessive instincts by making Raine a proposition too tempting to refuse. He never imagines he’ll fall for her himself.Hammer has buried his lust for Raine for years. After rescuing the runaway from an alley behind his exclusive club, he’s come to crave her. But tragedy has proven he’ll never be the man she needs, so he protects her while keeping his distance. Then Liam’s scheme to make Raine his own blindsides Hammer. He isn’t ready to give the feisty beauty over to his friend. But can he heal from his past enough to fight for her? Or will he lose Raine if she gives herself—heart, body, and soul—to Liam?(Ready to escape with something dark and edgy—and we don’t just mean the men? This saga, loaded with scorching heat, angst, rage, jealousy, and revenge, is super addictive. Just saying…)*Previously published as DOHL: Raine Falling (Book 1).The Unbroken Series: Raine FallingThe BrokenThe BetrayalThe BreakThe BrinkThe Bond