Peril at the Party: Missteps of Murder
by Aubrey Elle 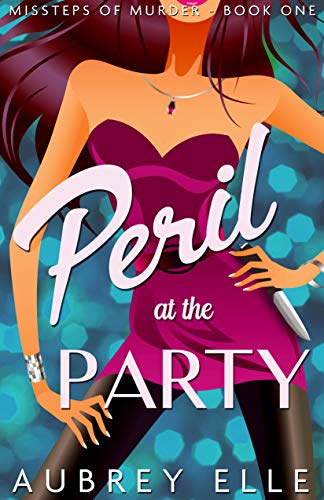 Once grand and gorgeous, the castle-like Baycourt Hall is now on the brink of closing. If business stays steady for the party venue, newly hired event manager Anna Glenn might be able to help the owners—handsome handyman Sean and his bubbly grandma Ruby—save it from failure. A wedding reception starts on a rocky note, but when the party wraps up, it turns downright deadly. Before the guests can depart, Anna discovers Father Asher stabbed in the foyer. Baycourt isn’t only crumbling, it’s a hotbed of peril. Asher won’t be missed, not with his habit of stealing church funds. But with the fresh scandal of his death, the townsfolk recall previous trouble Baycourt has weathered—typical drama that comes with idiots gathering. Despite the current unsolved murder, Anna and her aunt Pru are focused on another Glenn sister, Josie, who disappeared after attending a funeral there many years ago. When Anna learns Josie wore a family heirloom Aunt Pru wishes to have back, Anna attempts to search for clues at Baycourt. Just as she finds a clue that suggests Josie’s locket might have gone missing at the hall, another reception begins. Hopefully, nothing further puts anyone in peril, or there’s no chance of saving Baycourt Hall—and Anna won’t be able to solve the mystery buried in her family history.