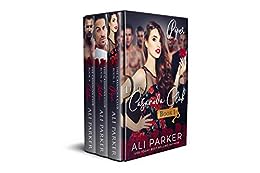 The Casanovas.
Twelve of the world’s most eligible bachelors are personally invited to take a seat in this exclusive, private match-making club. (Piper: Sharing is caring?)
The purpose? To find the perfect wife. Ten women are considered, but only one is chosen. Each of these men are after one lucky girl’s heart. Vetting these ladies is a yearlong event. Contests. Forms. Interviews. Demonstrations. Galas. (Piper: All of which I missed. Darn.)
The prize? One million dollars or a ring from the bachelor of her choice after the yearlong multi-engagement period is over. Lady’s choice. (Piper: Show me the money.)
The problem? Me. I need cash more than anyone could possibly understand, and there’s no way in hell I’d ever be invited to woo twelve men for a chunk of change. (Piper: Good thing I know the coordinator.)
The promise? To save my family from losing their house, their business, and their hope. All I need is a shot at the position. (Piper: Determination, haircare products, and a strut like I own the place will do the rest.)
Piper: These boys are in for a treat. Maybe. Possibly. What did I just get myself into?
The Casanova Club – Only one can win her heart.

Joshua
January 1st, 2019
The journey has begun—in the frozen north.
All the way to Canada to meet my first Billionaire Bachelor.
Joshua Curtis. Dark hair. Beyond hot. An artist?
How in the world do you make a billion dollars in art? I’m clearly in the wrong business.
This new journey is thrilling. Scratch that. Terrifying.
What does he expect from me? Or think of me?
Probably that I’m a cookie-cutter version of everyone else on their long list of “must-have” qualities. Yikes. He’s about to get a lovely wake up surprise.
Like signing up for a purebred horse and getting delivered a half-ass donkey. Ha!
I’ll just keep my cool and breathe deeply. It’s just a month.
It doesn’t matter. I have to keep my eye on the prize.
There’s a million dollars at the end of the road waiting for me. And it has the power to fix everything.
I got this. I think. Oh hell, I have no clue what I’m doing.
But I just have to survive the month, and then the months after that, and I’ll be right where I need to be.
Accepting the check from Jackson Lee at the end of the year.
Then I’ll walk away. No regrets. Or will I?
What if he’s romantic? The kind of guy that lives out of love and isn’t shy about it?
Oh man. Please let him NOT be that guy. I can’t fight against that kind of guy.
This year is about money and helping the family.
After it’s over, I’ll fall in love. Unless I do before it ends. Ugh.

Easton
No way in hell.
If someone had told me at the end of last year that I would have already fallen hard for one of the Casanova Billionaires, I would have called them a liar. A dirty, dirty liar.
But they would’ve been right.
Who wouldn’t fall for Joshua? I’m never going to make it through this.
It’s the second month in the year, and I’m faltering. Fast.
But Easton Price, NFL superstar and playboy hottie isn’t interested in where I’ve been. He wants to know where I’m headed and with who.
Hunky. Abrasive. 100% alpha male.
But there’s something else lurking in those deep brown eyes of his.
Something soft and warm, loving and dominant. He doesn’t show the public any part of the real him.
It’s better that way.
And his lifestyle? Good grief and gravy.
I’m out of my element. Yachts. Wealth. Fancy-people food.
But I’m quickly learning to love it and play the part. Or maybe I’m not playing at all.
Maybe poverty was just the card I was dealt, but after this year, everything will change.
I might miss Joshua, but Easton has taken my full attention.
Damn him and his pretty boy smile.
I have no clue who I like more.
Neither. I’m only in this for the money.
Right…