Pride and Magic (Spells and Sins Book 1)
by Melody Raven 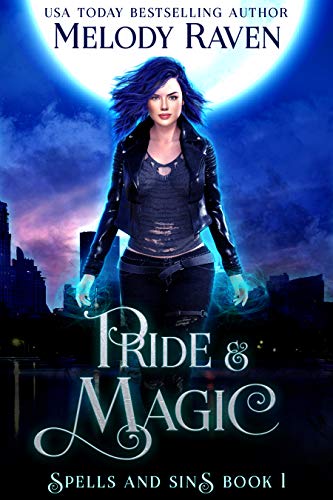 Available Stores (FREE)
Genre:
SciFi, Romance
Summary:
“I even ate this morning. My mother would be so proud of me. She’d be mad at you, though.”

“For bringing you into a police investigation? I’m pissed at myself about that too.”

“No. For wearing the same shirt two days in a row. What are you, a savage?”

Derek glanced down at the white button-up. “I have fifteen of these things. What makes you think it’s the same as yesterday?”

Sam twisted to a stop in front of him, and before he could stop her, she rested three of her fingers at the bottom of his ribcage. “Coffee stain.” She looked up and her eyes met his. “You should be more careful about that.”

Derek wrapped his fingers around hers as he removed her hand from his side, holding it tight as he said, “I’ve been a bit preoccupied. Must’ve grabbed a dirty shirt on accident.”

“This is why you need me. Someone to watch your back. Don’t detectives normally have partners or something?”

“The partners I’ve had in the past weren’t in charge of making sure I was dressed to code.”

“Then you need a girlfriend.”

Derek dropped her hand and moved past her to open the door to the building. “If that’s your way of hitting on me, I’m not interested.”

“Excuse me?” Sam walked through the door and followed his lead as he went to the elevator.

“Touching counts as flirting. We’re not doing that. Got it?”

Derek glanced over at her even as he clenched and unclenched the hand that had just touched hers. She had been throwing him off his game from the second she’d first caught him outside their building, and he wasn’t any closer to getting his equilibrium back.

Samantha Harris walked away from her family, and magic, years ago. But when a string of murders rocks New York City, Sam can't help but notice that the placement of the bodies screams magic. Except no one in her family seems to pick up the connection.

When she tries to give the lead detective a quick hint to send him in the right direction, Sam gets sucked further into the investigation than she ever thought possible. Now Detective Derek Pierce has to put together the half truths Sam is giving him and the facts of the case that get stranger by the second.

The killer is closer to Sam than she could've imagined and Derek is the only one who can stop him from tearing her family apart, but only if he knows the whole truth. And the whole truth is exactly what could kill him.