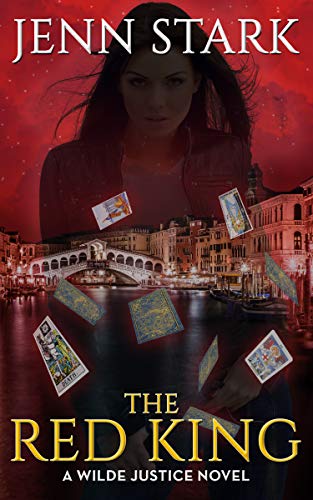 As the first Justice of the Arcana Council in two hundred years, Tarot-reading Sara Wilde is tasked with taking out the most dangerous magic-wielding criminals on the planet. Her first assignment? A killer known only as the Red King, who's systematically picking off the world's most gifted magicians in the rollicking streets and storied canals of Venice, Italy, on the eve of Carnevale.

Amidst the festival's music, masks, and brightly colored costumes, Sara must unravel the truth about a brutal murderer from Venice's own murky past, navigate the twisting political currents of magicians who seek to rival her own Council, and keep one costume change ahead of a conjurer whose lethal spells could end Justice--permanently. Good thing the diabolically sexy and deeply powerful Magician of the Arcana Council has Sara's back...if only he didn't hold so much of her heart as well.

The canals of Venice will run with blood when you deal in The Red King.