Children of the Knight (The Lance Chronicles Book 1)
by Michael J. Bowler 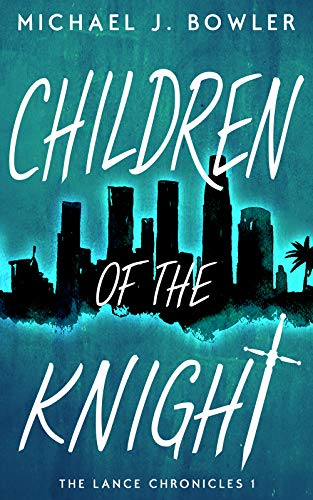 When 14-year-old Lance is saved from death, his life is forever changed. For starters, his savior claims to be King Arthur, the once and future ruler of ancient Britain. Lance has met lots of weirdos on the streets of L.A., and they claim to be many things. But this “king” not only reeks of sincerity, he wears armor, rides a gorgeous white horse, and lives in the storm drains underneath the city! Arthur has a throne, old-school clothes, and weapons up the wazoo. Swords, daggers, bows and arrows—the kind Lance has only seen in movies.

Turns out this Arthur guy wants to start some kind of revolution. He plans to collect other cast-off kids like Lance—even teen gang members—and create a New Camelot of Knights to gain more rights for youth and shake up the out-of-touch politicians who run Los Angeles.

Lance is all for helping kids like him. He’s spent his entire life in and out of the system, and it sucks. And he wants to believe in Arthur, but doubts even a king can accomplish such lofty goals. Despite these uncertainties, Lance readily accepts the position of First Knight—youth leader of Arthur’s new army—thereby setting in motion a crusade of tsunami proportions. When the children rise, will the city fall?

Children of the Knight is for readers who love urban fantasy mixed with action-adventure and populated by unforgettable characters. It’s the first in a complete five-book series intended for high school age youth and adults who love rousing coming-of-age stories that showcase strong adult characters in addition to the teenage protagonists.

There are instances of PG-13 language, drug addiction, and teen characters who suffer the aftereffects of abuse, but there are no graphic descriptions.

The Lance Chronicles opens up a world of possibilities for how we can better ourselves as a society. It’s an anti-dystopia series for those who prefer hope over pessimism.