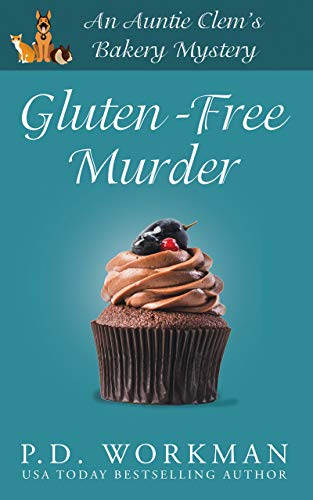 Erin Price moves to Bald Eagle Falls, a place where everyone knows everyone as well as everyone else’s business, taking over the store left to her by her aunt to start up a gluten-free bakery. The grand opening is marred by just one thing, the death of her business rival, Angela Plaint. It appears that Angela was poisoned by one of Erin’s cupcakes, making her a prime suspect.

Equipped with cupcakes, her desire for the truth, and new bakery assistant Vicky’s help, Erin goes head-to-head against Detective Terry Piper to solve the murder. Rumors of treasure hunting, drug dealing, and a missing boy swirl around Bald Eagle Falls as Erin tries to sort the clues from the red herrings and find the killer before the killer can take care of her.

★★★★★ P.D. Workman has done it again! This introduction to a new series involves a fresh start, sympathetic characters, and a murder. I spent the last ten minutes of the book standing up to read because I was off to do something but just couldn't put it down until I got to the end. I haven't been that invested in a book in a while.

Like baking mysteries? Cats, dogs, and other pets? Award-winning and USA Today Bestselling Author P.D. Workman brings readers to small town Bald Eagle Falls for a culinary cozy mystery to be solved by gluten-free baker Erin Price and her friends.

Have your gluten-free cake and eat it too. Sink your teeth into this sweet treat now!