Bet Me: A Romantic Comedy (Lucky in Love Book 2)
by Lila Monroe 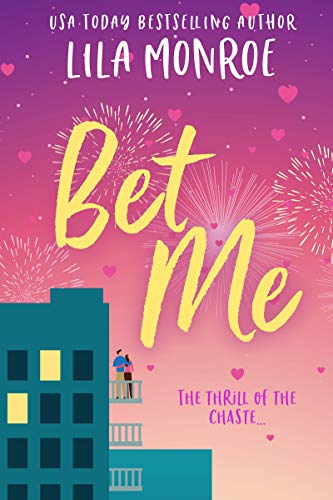 "The only thing more humiliating than a guy falling asleep face-down in my crotch would be if he died there... Oh my god, is he DEAD?"

All I wanted was little old-fashioned romance. After a parade of Tinder disasters who think chivalry is giving me a pearl necklace on the first date, I made a pledge: until guys step up their game, this girl is off the market.

But one bottle of chardonnay later, and my drunken rant has gone viral. I'm the most famous person NOT having sex since the Jonas Brothers put on their purity rings. A men's magazine has even put a bounty on my (ahem) maidenhead: fifty Gs to whoever makes me break the drought.

Be careful what you wish for... Now my office looks like an explosion in a Hallmark factory, I've got guys lining up to sweep me off my feet - and the one man I want is most definitely off-limits. Jake Weston is a player through and through. He's also the only one who sees through the mayhem to the real me, but how can I trust he's not just out to claim the glory?

And how will I make it through the strike without scratching the itch - especially when that itch looks so damn good out of his suit?

The thrill of the chaste has never been so sexy in the hilarious, hot new romantic read from the Amazon bestselling author of GET LUCKY and THE BILLIONAIRE BARGAIN.

Discover the hot and hilarious world of the LUCKY IN LOVE series from Lila Monroe!
1. Get Lucky
2. Bet Me
3. Lovestruck
4. Mr Right-Now
5. Perfect Match
6 Christmas with the Billionaire

PRAISE FOR LILA:
"I laughed my ass off. Let me know if you find it. I wish I'd written this book."  -- Kayti McGee

"I've NEVER had SO MUCH FUN while reading a book! This was insanely good"
-- Shayna's Spicy Reads

"Get Lucky is an enchanting, steamy, delightful read I never wanted to end" -- Angie's Dreamy Reads

"One of the funniest, light hearted, free spirited novels I have ever read... An absolute joy to read." - Bloggers From Down Under

"This.Book.Is.SOOOO.Funny! What is the best way to describe it? It's like a cross between The Hangover and...a steamy romance novel...hahaha. SO SO steamy. I'm surprised my kindle didn't start smoking. But more importantly, it was funny and endearing." -- Micah Liesel's Book Blog