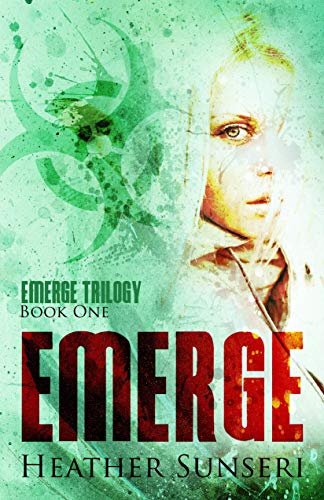 “Plagues and politics and romance, oh my! Dystopia meets science fiction in Emerge, the first book in a new series from popular YA author Heather Sunseri. …Truly, a well-crafted dystopian romance! Don’t miss this one!” ~Serena Chase, USA Today‘s Happy Ever After blog, author of The Ryn

Six years ago, a highly contagious virus wiped out more than ninety-nine percent of the country’s population. The only person to contract the virus and survive, Cricket fled her identity and the safety of New Caelum, an airtight city. Now eighteen, she watches the city where the wealthy cocooned from the devastating outbreak. When the city’s rumbling incinerator wakes her one night while she and her friends are camping just beyond the city walls, she alone knows what the fiery machine means: the lethal virus is back.

Only eighteen, Westlin Layne is already being groomed to succeed his mother as New Caelum’s next president. Suddenly West’s sister develops symptoms of the deadly virus thought to be eradicated years ago. Placed under quarantine, the president confesses to West a long-held secret: Christina Black, West’s childhood friend and first love, survived the virus, and her body alone holds the precious antibodies to save his sister.

Now West must leave the city to find Christina. But Cricket has no intention of being found.